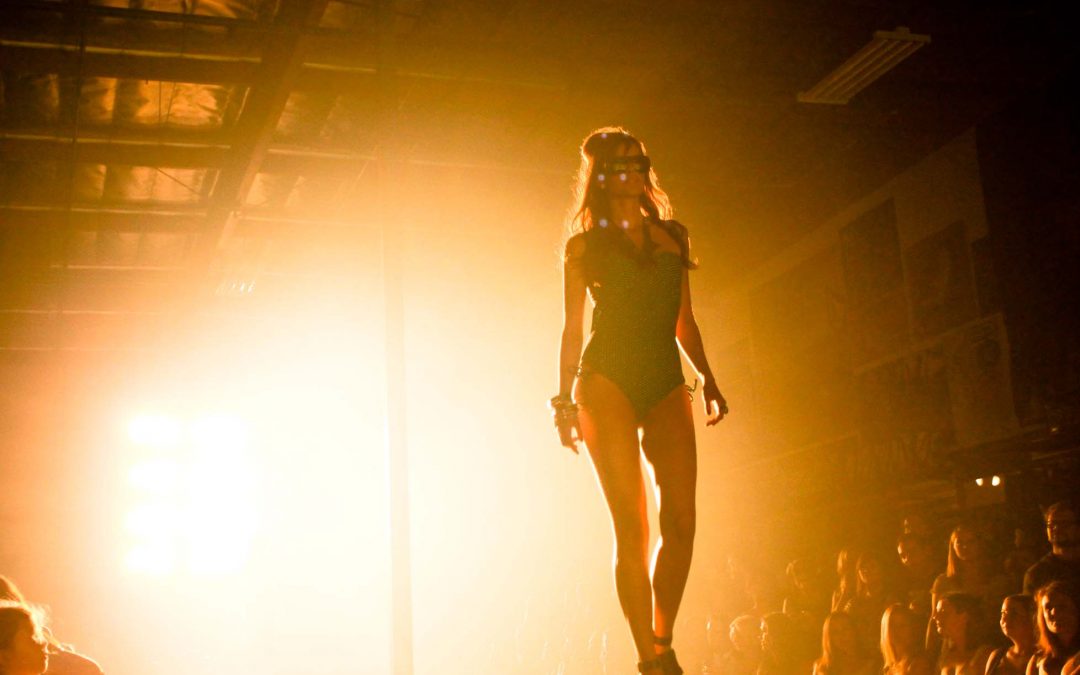 Way back in the days of the super model, I was fortunate enough to start and maintain a career as a professional model for over 10 years. Modeling and the modeling agencies that represented me took me to New York, abroad and to major cities across America. I was able to support myself through college taking print jobs, walking in runway fashion shows, participating in New York Fashion Week and often doing commercials. I was never really thinking about being a Fashion Show Producer but,  I was fascinated with the technical elements of the production of runway fashion shows – the staging design, the lighting design, the music selection, the video elements of the show, the choreography. While I was modeling, I realized that I loved technical production and I began pursuing a degree in video and film production. Little did I know that I would truly benefit from both my modeling experience and my bachelor of fine arts degree by merging the two into a successful career producing runway fashion shows, a few years following graduation.

While modeling for a major client of mine, St. John Knits, I was asked by a Vice President at the time if I knew of a great runway fashion show producer that could travel for the company. Somehow, I heard myself saying “I can do that!”. I was young and fearless and the CEO gave me a chance. He handed me a large charity show to produce – 300+ in attendance, in a large hotel ballroom, casting 20 models and working with a line-up of over 60 looks. It was a big show for a person who had never produced a runway fashion show! I suppose my modeling experience gave me instinctive know-how and the show was a success. It was shortly afterward that St. John offered me a full-time position as their runway fashion show producer. I traveled extensively for a year, producing fashion shows all over the country as well as in Europe. I worked with major retailers including Neiman Marcus, Nordstrom and Saks Fifth Avenue, managing the fashion shows and personal appearance details for Marie Gray, designer and founder, and Kelly Gray, the signature model. It was an incredible year that taught me so much. I came away with invaluable knowledge that I use to this day. I learned attention to detail, meticulous planning skills, and multi-tasking, all of which are necessary to be a successful runway fashion show and event producer.

After a year of working with St. John, I was ready to start my own business. I presented the idea to St. John and they said they would love to hire me on a by-the-project basis. I still work with them to this day! They are my most loyal and beloved client. Once I started my business, I started gaining new clientele – the first show I produced on my own was for the legend Bob Mackie. It was a charity event in Los Angeles that featured his amazing red carpet glamorous collection. Soon after that, Escada starting hiring Shannon Davidson Productions. I did a substantial amount of travel, producing fashion shows across the US. Soon thereafter, I starting producing shows for South Coast Plaza, Vogue magazine, Teen Vogue magazine, many clients for New York Fashion Week, Miami Swim Week clients, activewear and denim brands among others.

My tasks as a fashion show producer are many. The first is working with the venue to establish the correct scenic design to best serve the designer’s vision as well as the audience size. The next is casting the best models for the show. Model casting is fun for me as I can relate to the role of being a model. I can do remote castings via video that the agencies send me digitally. Or I can cast models on site, prior to the show. Once the main details are set, I go into the more detailed production design of lighting and music selection. These two elements are dictated by the runway fashion show collection that the client gives me to work with. Sometimes the client has a clear direction on these items, other times it is left up to me to give creative direction. Either way is rewarding to me.

I truly love my job as a runway fashion show producer and am so grateful for the unexpected path that led me here!